Wethen, 22 January 2021 – The ban is here! Church and Peace members across Europe are celebrating the Treaty on the Prohibition of Nuclear Weapons (TPNW) finally entering into force on 22 January 2021. And they are pushing for even more ratifications.

The TPNW is a great success story. And it is also a story of continuing efforts by a broad coalition of actors and supporters with the goal of creating a world without nuclear weapons. In 2017, ICAN was awarded the Nobel Peace Prize for securing a motion at UN level to ban nuclear weapons worldwide. From then on, numerous countries, cities, and organisations joined the movement until, in October 2020, the threshold of 50 ratifications by UN member states was reached. Today, 90 days later, the ban treaty is entering into force and thereby creating binding international law.

Church and Peace members across Europe have supported the cause for many years and are continuing to regularly organise vigils and other events to highlight the dangers which nuclear weapons pose to peace in the world. Church and Peace has been a member of ICAN since early 2020.

“It is a truly historic moment which we are witnessing now,“ says Antje Heider-Rottwilm, Chair of Church and Peace. “While we are celebrating, we are also aware that many NATO countries where our members live – such as Germany – have not yet joined the Treaty and further efforts are urgently needed.”

Church and Peace, together with NGOs such as ICAN Germany, Greenpeace, IALANA, Friedenskooperative, Naturfreunde, DFG-VK, and IPPNW, is co-organising an act of witness in Berlin. The alliance has sent a letter to the ambassadors of the 51 states which have ratified the TPNW so far, congratulating them and inviting them, together with the press, to the Federal Chancellery on 22 January at 10 a.m. with the motto “Nuclear weapons are banned. 51 states have ratified – Germany is missing”.

In the UK, Church and Peace Board member, Barbara Forbes, will moderate online thanksgiving celebrations organised by the Network of Christian Peace Organisations.

Church and Peace members in France are encouraging citizens to urge their local authorities to bring the Treaty to the attention of the wider public and to continue winning the support of political leaders. 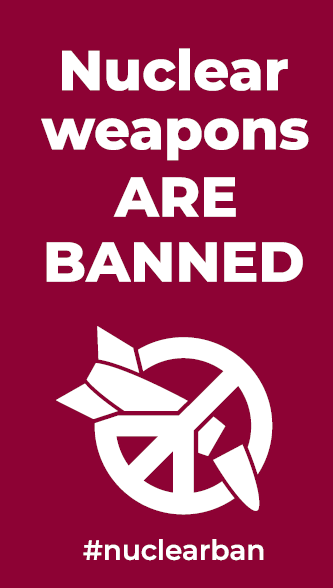