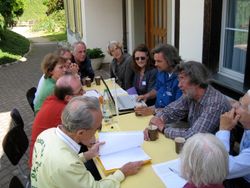 Church and Peace is itself a member of several different international and regional networks and coalitions.

Church and Peace joined the Conference of European Churches (CEC) as an associate member following the Second European Ecumenical Assembly in Graz in 1997 and has sent a representative to the CEC Church and Society Commission’s working group on peace, security and reconciliation.
CEC is a fellowship of Orthodox, Protestant, Anglican and Old Catholic Churches and associated organisations from all countries on the European continent.

International Network for a Culture of Nonviolence and Peace

Church and Peace joined the International Coalition for the ‘Decade for the Promotion of a Culture of Non-Violence and Peace for the Children of the World (UNESCO)’ in May 2006. The International Coalition was created to promote the UN Decade with its aim of transforming a violent culture into a peaceable one. At the end of the UN Decade the members decided to continue the work as ‘International Network for a Culture of Nonviolence and Peace’ with the particular focus on promoting peace education. The network is comprised of 14 national coalitions (3 of them observing members) and 19 international organisations (2 observing members).

Church and Peace is a member of the UK-based Network of Christian Peace Organisations.
NCPO is a broad group of organisations in the Christian peace tradition committed to furthering peace and encouraging the churches to support the peace movement.

Aktionsgemeinschaft Dienst für den Frieden (AGDF-Action Committee Service for Peace) is a German umbrella group bringing together 32 peace service agencies and peace organisations. In addition to promoting volunteer service and its mechanisms, AGDF acts as an advocate in the churches, government and general public, striving to raise awareness about peace and justice related issues.

Church and Peace is a partner in the Assisi Coalition together with the European Franciscan Working Groups for Justice, Peace, and the Integrity of Creation (JPIC); the International Fellowship of Reconciliation; and Pax Christi International.