The signatories “urge our governments to use the opportunity of the 75th anniversary of the only occasion that nuclear weapons have been used in conflict, to ensure that they are never used again in any circumstances. We call upon all States to join the growing community of States which have rejected nuclear weapons entirely.” 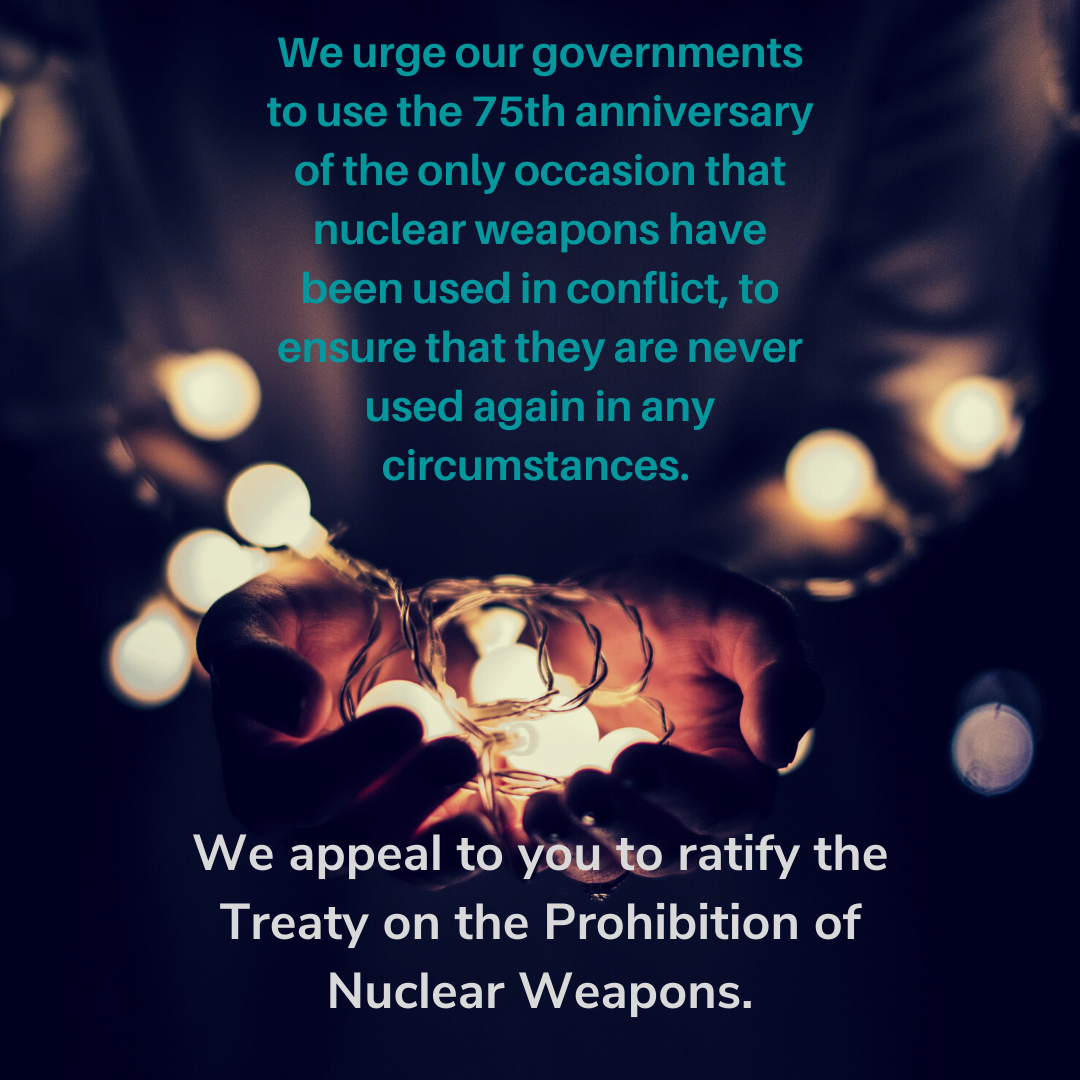 “As a wide coalition of faith-based communities from around the world, we have committed to speaking with one voice that rejects the existential threat to humanity that nuclear weapons pose. We reaffirm that the presence of even one nuclear weapon violates the core principles of our different faith traditions and threatens the unimaginable destruction of everything we hold dear. Nuclear weapons are not only a future risk, their presence here and now undermines the ethical and moral foundations of the common good. We call for your commitment to a world that is more peaceful, safe, and just—a world only possible with the elimination of nuclear weapons.

August 2020 marks the 75th anniversary of the nuclear attacks on Hiroshima and Nagasaki—attacks which devastated these cities causing up to 213,000 deaths by the end of 1945 and many more in the following years. The attacks inflicted excruciating pain and suffering on both humans and the environment.

We are grateful for the global hibakusha, survivors, who have courageously borne witness, often in the face of intimidation and the recurring tragedy of loss and illness. We must meet the courage of the survivors with our own. We must abolish nuclear weapons forever.

We lament the racism and colonialism that drove the nuclear-weapon States to test their weapons on the communities that they deemed expendable, lives far away from their own, lives that mattered less, lives that were taken in pursuit of destructive power for a few. We acknowledge the immense suffering, oppression and exploitation faced by the Indigenous communities around the world whose bodies, lands, waters and air have served as the testing grounds for the ambitions of those who dominate with force.

Few who believe in the disingenuous notion of nuclear deterrence have witnessed or experienced the devastation of these weapons in their own communities. After seventy-five years we can see that nuclear weapons have not brought an end to war. Nuclear weapons do not create peace, rather they intensify the scourge and threat of war in our world, lives and communities. Because they are designed to cause massive and indiscriminate destruction, because they siphon precious resources that are needed to meet human needs and protect our shared planet, and because they enforce and sustain a global system based on domination and unending violence, the existence of nuclear weapons fundamentally contradicts the principles of any moral, religious and ethical system that values life.

Whilst many of our lives and imaginations might be far removed from memories of “hell on earth” and the legacies of environmental impacts, shattering health conditions and trauma wrought in a nuclear explosion, the impacts of the current global health crisis have given us all a glimpse into how life would change in the event of a nuclear explosion. Like the COVID-19 pandemic, the health, environmental and economic consequences would not be contained in space or time. Nuclear tests and accidents have revealed that radiation spreads through the atmosphere, oceans, plants, animals, and whole human populations. Our economies, production chains and ability to grow food would be severely disrupted.

Many have consigned the stories of the horrors of this time to our distant past—stories only to be revisited when certain leaders deem it necessary to remind their citizens what others might do to them if they give up their own nuclear capacities. But we will not forget or ignore the powerful witness of those affected by developing, testing and using nuclear weapons. We are committed to ending nuclear weapons forever to honor the global hibakusha and to save our children, grandchildren, and future generations from experiencing what they suffered. As we build a world where equality, peace and justice are abundant for all, there is no place for nuclear weapons in our shared future.

Despite commitments made—including under the Treaty on the Non-Proliferation of Nuclear Weapons (NPT)—nuclear-weapon States have continued to maintain and develop their nuclear arsenals, while other States have worked to acquire them.

Despite our clear-eyed awareness of the dangers of the present moment, we are united in our irrepressible belief that change for the good is possible—in individual lives and in our world. We know that in the most dangerous and threatening times, human beings are capable of cooperation, creative problem-solving and mutual trust. Indeed, the existence of the nuclear Non-Proliferation Treaty (NPT) itself reaffirms that hopefulness. The NPT was born out of a moment when fears about nuclear war and distrust were at a peak, and it acted as a beacon to remind nations that international collaboration was possible and that each nation’s security does not demand the insecurity of others, but rather is contingent upon the security of all. We find ourselves again in such a moment in which the reaffirmation of international norms and the embrace of the NPT’s ultimate promise—abolition—must be realized.

In 2017, this goal of abolition moved closer to becoming reality when the UN adopted the Treaty on the Prohibition of Nuclear Weapons, calling for the complete elimination of all nuclear weapons. Once 50 States have ratified it, it will enter into force.

We urge our governments to use the opportunity of the 75th anniversary of the only occasion that nuclear weapons have been used in conflict, to ensure that they are never used again in any circumstances. We call upon all States to join the growing community of States which have rejected nuclear weapons entirely. We appeal to you to ratify the Treaty on the Prohibition of Nuclear Weapons.”