The French-speaking section of Church and Peace met on the weekend of 10-12 June in Paris, hosted by the Sisters of St Joseph de Cluny, a very international and radiant congregation. It was an opportunity to meet again after the pandemic to “tune our violins”, but also to attend the colloquium “Rethinking Security in Europe”, co-organised by MIR France, Pax Christi, Stop Fuelling War and Church and Peace.
We were a small but motivated team, happy to meet again for these exchanges which could be more profound because of the face-to-face meeting and the duration of the event.

On Saturday, the day of the Colloquium, Ralf Becker impressed us with the work done in Germany by the Protestant Church of Baden in its programme Rethinking Security2 . This programme aims to convince governments to support projects in the field of non-violent defence. A number of peace and non-violent defence organisations have joined forces to advocate that at least 10% of the defence budget should be dedicated to non-violent defence objectives. To this end, they have worked on the presentation of a strategy for non-violent defence based on five pillars, including sustainable development in neighbouring countries and Africa, or investment in means that make democracy resilient, such as associations working in mediation.
“Saying “stop” must be accompanied by an open hand”: this leitmotiv of Ralf’s sums up the non-violent approach of this campaign which always seeks dialogue with opponents or authorities.

Jean-Arnold de Clermont (former president of the French Protestant Federation and of CEC) spoke about the theory of just peace – a notion that the French-speaking culture has not yet integrated, as it remains based on the idea of just war. He insisted on the role of associations, of civil society, on the work to accompany people to be actors of their own lives in front of challenges to be considered with realism, such as the one of Russian disinformation in Africa.

Then, Michel Roy (former president of Caritas Internationalis and currently secretary general of the Commission for Justice and Peace, France) deplored the very weak response of both civil society and the Churches to the current war, when it is becoming clear that we can no longer think of war as a solution. He proposed support for local initiatives, to link them up and create networks of associations. He stressed the importance of civil society in Africa, but also the ambiguity of its support for certain coups d’état in particular.

During the debate that followed, the question of realism was raised: can we juxtapose non-violent and violent struggle, or should we refuse all violent defence? Is “civil society” not sometimes simply an extension of a political faction that manipulates it?

The afternoon was devoted to workshops.
One of them, with Cécile Dubernet from the Catholic Institute of Paris, was on the theme of civil peace intervention (CPI). About 50 organisations are taking up the challenge of protecting civilians by civilians, such as CIP or Peace Brigades International. Another workshop on conscientious objectors put participants in contact via video conference with a Ukrainian objector who advocated for the right to conscientious objection in Ukraine. In yet another, a former Minister of Defence from the Central African Republic was present. Each crossroads was intense. (The interventions of the Colloquium will be included in the Cahiers de la Réconciliation of MIR France at the end of the year).

The next day, a journalist from the newspaper La Croix came to interview our small group on the theme “the courage of non-violence”. This was an opportunity for a deep and improvised common reflection. We then celebrated with a Bible sharing where each person brought a text that particularly inspires them in their spiritual and non-violent journey.

Informal exchanges are of course a very important part of such a meeting. Thank you to Maria and to all those who made this possible!

A representative group of non-violent movements in France will start work in the autumn to follow up this conference. 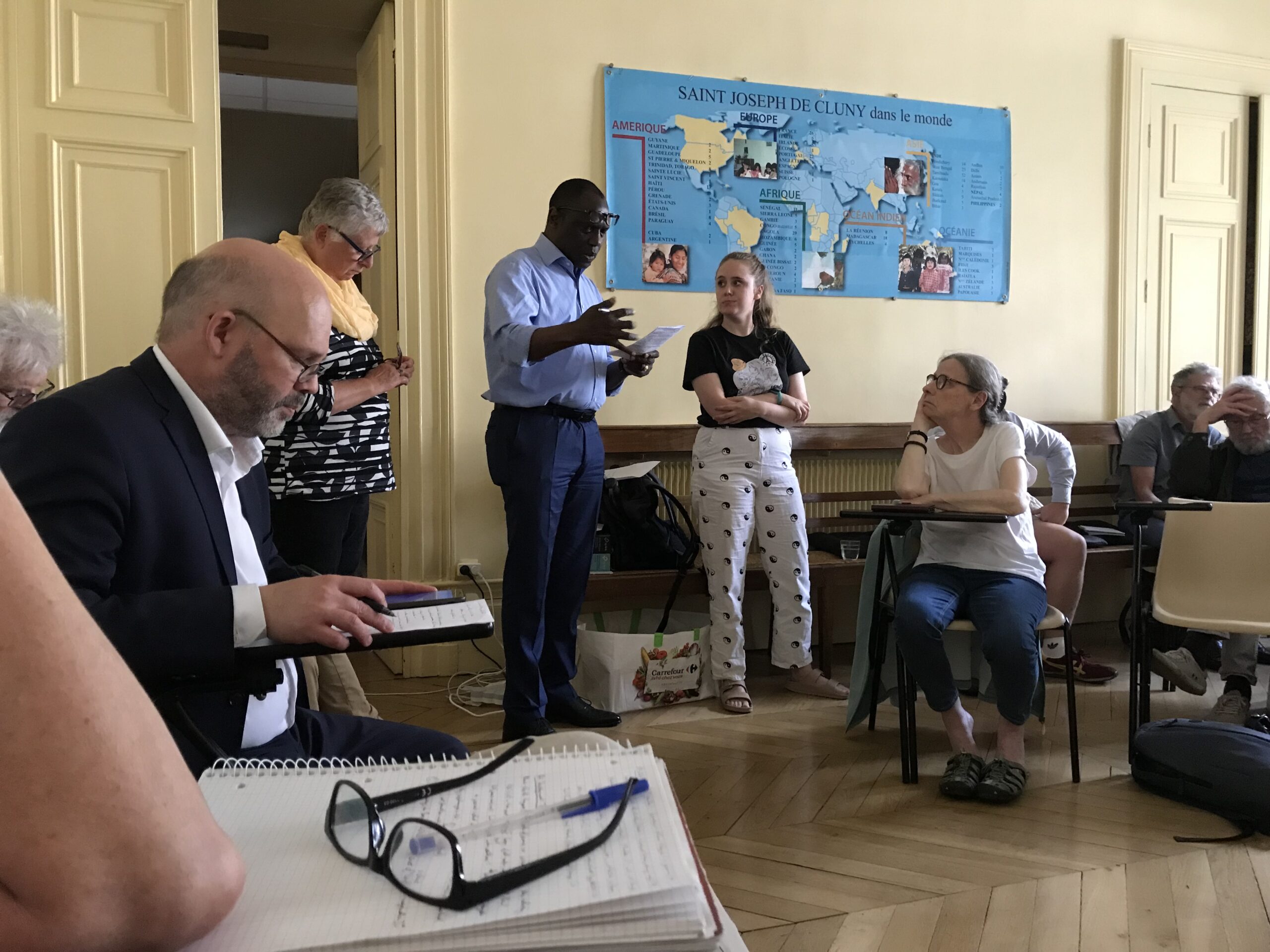 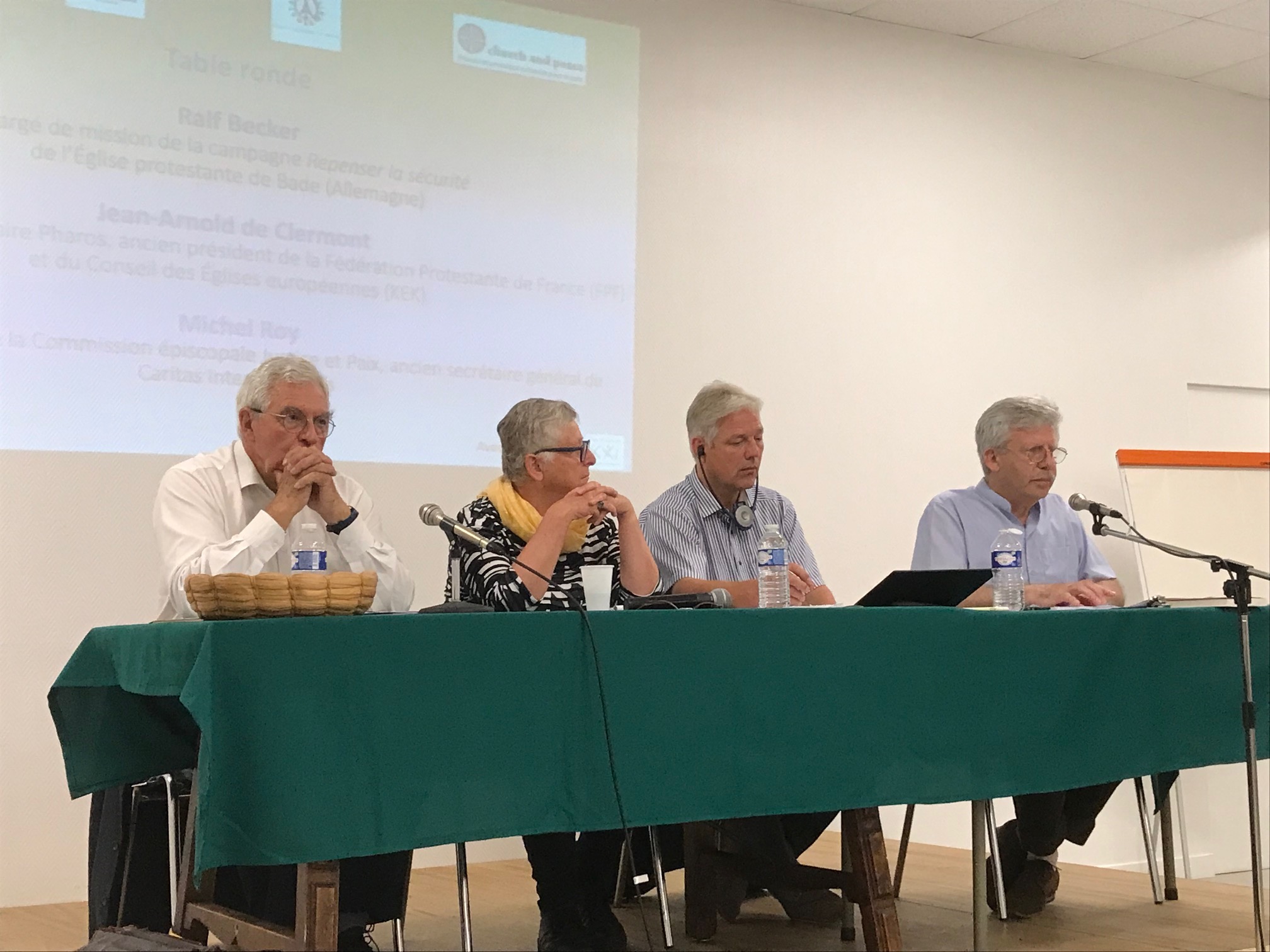